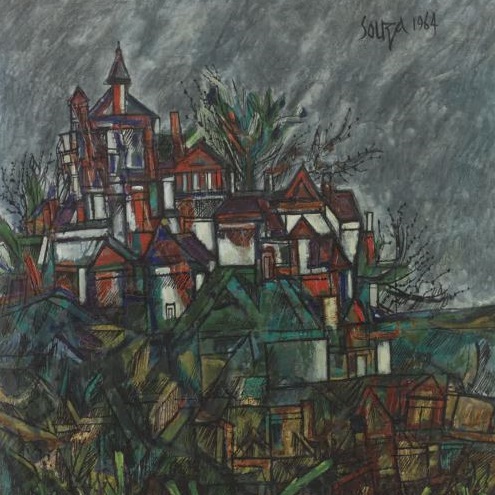 We recently unearthed a forgotten painting by Indian artist Francis Newton Souza in our company vaults. Souza was a founding member of the Progressive Artists’ Group of Bombay and was the first post-independence Indian artist to achieve high recognition in the West.

In the early 1960s, Souza was a penniless up-and-coming painter living in London. Reeves & Sons kindly gifted him materials and in exchange, in 1964 he repaid them with a painting of Hampstead Village. The painting hung at our Wealdstone site until we moved to Shepherds Bush in 2012, where it was placed in storage and forgotten about for seven years. It was then discovered this year, after a conversation with our old CEO led to a hunt at Head Office. Fittingly, our current CEO Dennis van Schie found it safely tucked away in a storage room! We then engaged SaffronArt to value and eventually auction the painting and return it to the light.

Souza moved to NYC in 1967 where he lived until just before his death in India in 2002. His paintings have gone on to sell for over US$4million and Neelam Raaj wrote in The Times of India “With a few slashing lines and a raw, expressive energy, Francis Newton Souza stripped away all subterfuge. The gnomish, pox-scarred boy from Goa, who went on to become one of the first Indian artists to be feted in the salons of Europe, laid it bare.”