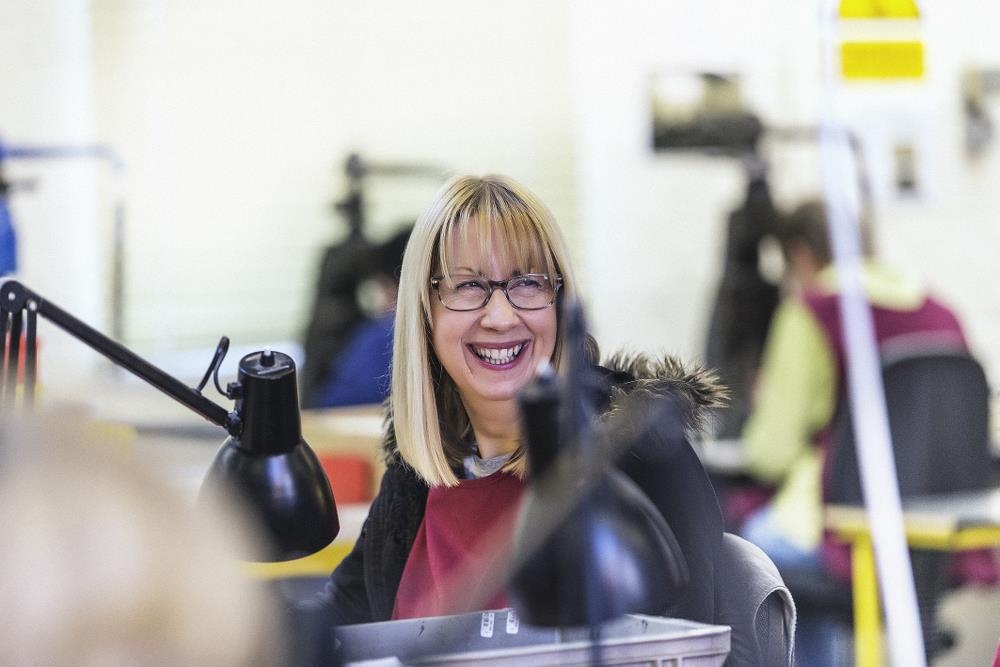 “I Fulfilled My Dream”. Tina Rumbal Reflects on 40 Years at Colart. 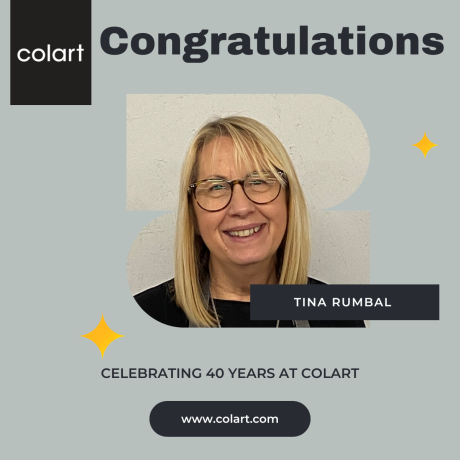 ” It’s part of my family, and it’s a good place to work. Everyone’s so friendly, and it’s interesting. Even after all these years, it’s still interesting. It’s not a production line where you press a button, and things move along a conveyor belt. No two days are the same and everyone’s my family. I couldn’t imagine being anywhere else”.

This month, we celebrate Tina Rumbal’s 40th year working for Colart. Based at the Crown factory in Lowestoft, England, some might look at her image and think, “Tina looks very familiar”. Well, you are correct, as Tina featured in many print and online publications at Colart throughout the years. Her image can still be found today. As seen in our Our Values section of the career pages on colart.com, there is no better place for Tina to belong.

Tina is our values (Openness, Passion, Innovation & Quality). This was so clear when Corporate Communications Manager Gareth Meredith spent some virtual time with Tina getting to know her Colart story. We are sharing this with you in the following interview. Enjoy Tina’s story!

Tina Rumbal Thank you very much.

Gareth Meredith Now tell us how you came to work at Crown or Winsor & Newton, as it was known back then.

Tina Rumbal Well, technically the brush factory has been in my life for my entire life because my aunts and cousins always worked here. We used to go on picnics, and some of the other Series 7 ladies would come to the picnics. And then there was a time when there were keep fit classes set up in the canteen on Wednesday evenings, which I also went to. I must have only been six or seven years old. So from that, I got to know a lot of the ladies that worked here from a child. And then my cousins came to work here. Apparently, I always used to say that I would work at the brush factory when I grew up. And so I fulfilled my dream!! I stayed on at school an extra year and then came straight up here for an interview and got the job.

Gareth Meredith What did you think attracted you so much to Crown or Winsor & Newton as it was back then?

Tina Rumbal I think it was the family feel. As I said, because I knew a lot of the ladies anyway and they would talk about working here, it felt like a family, and it just seemed a natural progression for me to become part of the team myself. I hadn’t planned on staying here at the time, and there were a couple of times that I considered pastures new, but nothing came to fruition. So I did stay and then it got to the point where I didn’t even think about leaving. It was my job. Everyone became my friends, and it was close to home. I had no reason to want to go anywhere else.

Gareth Meredith 40 years is a long time. What can you tell us about your career journey throughout that time?

Tina Rumbal When I first started, they had just developed the sector range. My very first job was mixing the different filaments that would go into the sector range. We mixed by hand back then. We literally had a set of scales where we would weigh out the amount of hair with ferrules. We had to make sure we had the right type of hair mixture. I was taught to mix by hand. Eventually, we got machines in to mix the hair, so I then progressed into the Blankshien department, mixing the hair on the machines. I then went on to learn tufts. I went to Germany to look at some tooling for tuft making. I trained up on dressing Series 7 hair in between all of this. I also went into the cosmetics department as we made cosmetic brushes for a while. I really have dotted about in all the departments. Later, I went into new product development and became a key operative. From that point, I could work different jobs anywhere within the factory. Eventually, I went back to dressing which I mainly do now. I travelled to China to train the team on how to cut the tails. I went there with Mark Samuel. At the moment, I’m doing testing with different hair .. so it’s now a bit of everything. I go where I am needed.

Gareth Meredith You have such a breadth of work experience. Thinking about that, what is the one key thing you’ve learned or experienced that stands out for you?

Tina Rumbal Learning about quality. It has been there throughout my entire journey. I think it comes down to the quality of our brushes. You learn to take pride in what you do, and that’s really something that I always carry forward. If I’m training someone, I always talk about it. The quality of our work has kept us where we are.

Gareth Meredith When you’re training someone, how do you impart that knowledge around quality? How does the essence of quality get passed on to other people?

Tina Rumbal I like to think I nurture and rather than say “do it like this”. I think it’s a gradual thing of “I show, you copy”. I leave them alone [to practice] and come back and check it. [My approach is] “that’s very good but maybe do a little bit more to it”. And, nurture them. [Encourage them] to feel that pride in their work.

Gareth Meredith It is a very different kind of work to many other places and processes. I understand the nurturing component because it’s not something where you could actually say, “you do this, and then you go off and do it. It’s organic learning.

Tina Rumbal Yes. Especially when it comes to holding hair. Everyone has a “day one” where they’re nervous about holding hair correctly. You hold it so that you don’t drop it and lose it. It’s all about patience. I remember my first days and how nervous I felt. Then before I knew it, I could handle the hair. Once I got that, then everything else became that much easier.

Gareth Meredith Fantastic. So the quality is the one thing you’ve learned that stands out. What about the one person that you couldn’t do without in your time here at Crown?

Tina Rumbal I don’t think that I could name just one person. I was originally taught by Irene Field, who had been here for a long while. We used to call her Auntie Irene. She was so good at teaching people/ I also worked with Robert Harrod for a number of years. Also, Peter Smith, and Richard Lewellen, all had that passion for what we do. You draw that passion in yourself because someone else is passionate. You learn to have that same passion.

Gareth Meredith What’s been your proudest moment at Crown?

Tina Rumbal I’ve helped develop the MOP brushes and the PWC synthetic range. There are several that I’ve had a hand in helping develop. Whenever I go into a shop where art materials are sold, I’ll find one of our brushes, and I feel a sense of pride that I might have had something to do with it. [Working at Crown] never felt like just a factory job. There’s a lot that I’m proud of, really, and it’s the reason that I’m still here … still going strong.

Gareth Meredith What about the toughest moment at Crown?

Tina Rumbal Nothing really stands out that I would call a tough moment. Obviously, when there have been uncertain economic times, no one knows exactly how secure their job will be, but because we are so much like a family, we’re all in it together, so nobody’s going through things on their own.

Gareth Meredith And a funny moment. Is there anything funny that really stands out for you that may have happened?

Tina Rumbal Yes, I did have one moment. At one point, this room [where I am being interviewed] used to house the mixing machines. When we took the hair off, we would lay it out on big cardboard sheets. And then, the next mixed run would be added to another sheet on top of that, and so on. That would gradually get built up until it was a complete job. We would then take to “the makers” [which involved going] downstairs and then up another little set of stairs. We used to carry all this hair on these cardboard sheets in one go down the stairs. On one summer’s day, I had a pair of flip-flop style sandals on … and I was carrying the cardboard sheets with another girl downstairs. One of my flip-flops came off! I didn’t fall, but I did land on my bottom, and I let go of all the hair!! I have to say I laughed!!! I think it was a little bit of a shock that it had happened, but you had to laugh. Just by sheer chance, the manager, Peter Smith, appeared. At the point that I’m laying out on the stairs in fits of laughter with all the hair falling around me.

Gareth Meredith What advice would you give to someone who wants to join?

Tina Rumbal There’s much dexterity needed for this job. They’ve got to be made aware that they will be incredibly nervous to start with just handling hair. But, I had a “day one” when I was sitting in their shoes, feeling exactly the same as them. Practice makes perfect. It can be really daunting, and because it looks crazy, some of the things we do with the hair, but everyone’s had a “day one”, so everyone knows how you’re feeling.

Gareth Meredith OK, last question … what keeps you working at Crown?
Tina Rumbal It’s part of my family, and it’s a good place to work. Everyone’s so friendly, and it’s interesting. Even after all these years, it’s still interesting. It’s not a production line where you press a button, and things move along a conveyor belt. No two days are the same and everyone’s my family. I couldn’t imagine being anywhere else.

Gareth Meredith Lovely. Tina. 40 years is such an achievement and something to be so proud of. Congratulations from everybody at Colart.